...or, rather, 'eep-eep-eep' which seems to be the way in which mother ducks keep their offspring close to them and the ducklings respond in the same way!

One of the best things about June. Always fearful that I have missed my chance to spend a little while with my particular favourites - and happy when, having walked past many families of almost full-grown young from earlier broods, I see an entire set of ripples heading my way - more than can be caused by the one adult female which is all I can see clearly at a distance.

I had been carrying 'duck food', mixed seed and corn, for a few weeks - trying to find an opportunity to visit the canal at Llangollen. Yesterday, whilst son was helping at the local Scout campsite we persuaded his fourteen year old sister  to go with us. At fourteen, parents are embarrassing at the best of times, but parents that kneel on the tow-path hand-feeding ducks, whilst constantly talking to them, are - apparently, so embarrassing that its best not to be seen with them. The mother ducks were tame and although pecks from them don't hurt at all they do make me jump - in turn making the ducks jump and causing me to drop entire hand-fulls of seed at a time. You might think that this was to the duck's advantage but it sinks very quickly and the babies are too little to up-end to reach it.

Whilst I enjoyed their company, my husband managed to take some pics. They didn't keep at all still and, although I made friends with several families, the photos below are the only ones remotely worth posting. Working our way up the canal we arrived at the horseshoe falls, where we watched clouds of small fish, some being gobbled by a slightly larger fish, darting around our feet. My daughter was sufficiently distracted by the novelty of using Dad's camera and added the photo of the drake in all his beauty.

Now so much for embarrassing parents! One of our usual means of occupying the kids on long car journeys used to be to sing. Often tedious 'one-man-went-to-mow type' songs. As they got older Scouts campfire songs took over. The only sensible route back to the car was back the way we had come. This was too boring for our daughter who decided to pass the time by singing, and dancing (where some sort of linear progression was possible) a whole string of irritating action-type 'disco - songs' - oblivious to the strange looks SHE was getting! 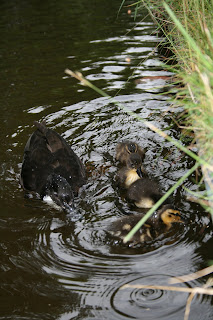 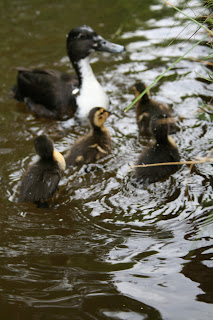 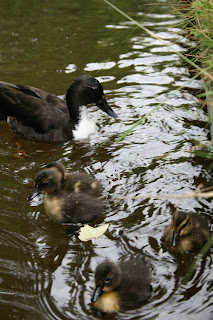 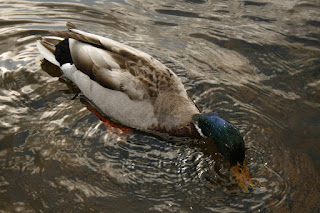 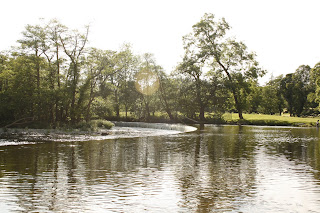 Posted by Sue, Lynwoodcrafts at 14:53 No comments:

Pretty and Practical - Folksy Friday No 38

Whilst I do like purely decorative items my display space is limited and it is lovely to find useful items which are also beautiful. I hope you like my choices. Click on any item to view it on its Folksy shelf. ... a new listing from Lynwoodcrafts. Choose an item from the list and then select from more than 12 embroidery designs (more to follow soon). Your item should be posted to you within four working days. See the listings in my Folksy shop for detailed information

To see the selection of Custom Items and the Custom Designs which are available click the tabs on the link bar.
Posted by Sue, Lynwoodcrafts at 13:03 No comments:

My son was 'mountain-biking' yesterday evening, with his Explorer Scout unit. They stay for about 2 hours, but, since it takes at least 30 mins to get there and another 30 mins to get home, I put my boots in the car and walk whilst he's cycling. The centre he uses is in an area of forest and there are way-marked foot paths, however, walkers are in the minority! We find most folks engaged in out-door pursuits to be friendly, helpful people, generally. My son has been rescued by kind souls providing extra inner tubes etc in the past - when he has worked through the ones he had on the bike and his spares. Unfortunately for me, the centre now has a barbecue night on a Wednesday and, yesterday, were having some sort of time trial/race. The cycle and bike routes are entirely separate and clearly marked. However, the forest was far from quiet and crossing the main cycle tracks was almost like trying to cross a town by-pass in the rush hour. I followed the marked trail to its junction with a network of public footpaths over open moorland and escaped over the stile into peace and quiet.

When timber is cut the habitat is drastically changed. Good practice suggests that some trunks should be left as nest sites and perches, particularly for woodpeckers. These serve the purpose but have also been employed as something akin to totem poles. I have often wondered whether the carved silhouettes would be rocognizable to their real cousins and thus serve to scare them off. I took pics of a few including the 'bikes' for my son's benefit: 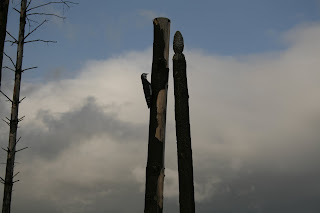 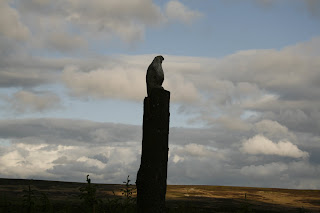 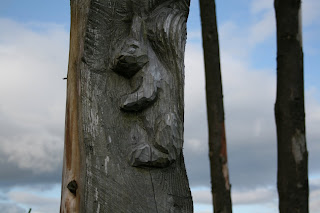 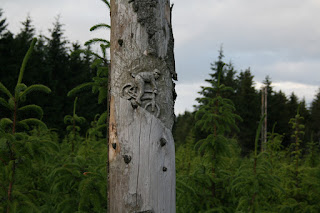 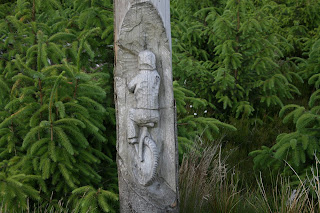 Once out in the open it was very windy and a little cold. There were many small, ground-nesting song birds which I did not identify. The path is little more than a sheep track - in places not even that. The sheep had obviously found it a little narrow and kindly left tufts of their fleece. I gathered some on the way back - although probably not exactly the same tufts as I saw on the way! The path was marked with arrows mounted on short posts at sensible intervals. I wasn't carrying a map having meant to stay on the forest trails, but the path was easy to follow. The area is used by local groups carrying out Bronze Expeditions for D of E and I was wondering how any of them ever managed to get lost - in good visibility at any rate. I walked for half the time available to me and then turned back. There were some lovely lichens, new curls of bracken and many heathers and grasses but it was much too windy for decent photos, neither I nor they could stand still! I took these pics just to reference the general colours: 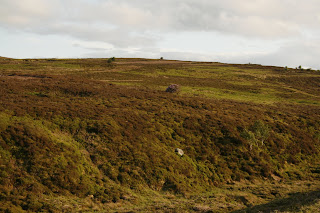 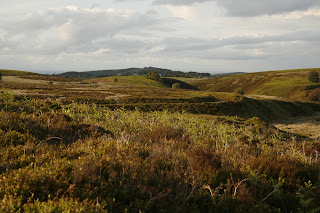 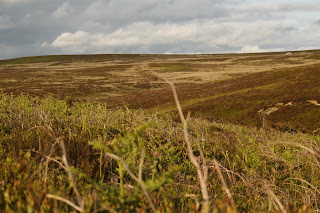 As previously mentioned, the path was marked although otherwise a little indistinct. Having turned back the previously visible posts were now hidden by the heather and I took a wrong turning cunningly worn for me by the sheep! I could see the stile I was returning to, so was not lost. However, I must admit it would have been a little different in fog! The forest is peppered with carved 'statues' representing local wildlife. The forest trail, up to the stile, is marked as the 'black grouse' trail and statues of the birds - in a frighteningly large scale mark the stile. As I was running out of even the narrowest of sheep trails, I heard the characteristic 'Go Back' call followed by a sqwawk and a black grouse rose a little above the heather and flew of in alarm. I was thrilled to see both it, and its mate, by whom it was followed, but very sorry to have disturbed them.

My tracking skills are dreadful, I tried to re-trace my steps and failed. Not wanting to disturb them again I set off in an arc towards the stile. Unfortunately, the heather was getting deeper and I was concerned about stumbling across more nest sites  - be they of grouse or other birds. There were areas of recently burned moorland which I decided would be safer, since I could see my feet at least. I trudged through a very boggy bit to get to the first. Now I know that my bargain-priced boots are both comfortable and waterproof! My walking pole was not a 'must-have' 'look-the-part' accessory, but essential. My right arm aches almost as much as my legs today. I have found in the past that walking poles allow one to retain some dignity whilst effectively proceeding on all fours. Unfortunately my dignity was temporarily abandoned when I tripped over one heather bush - a springy soft landing at least! I was now short of time and the small patches of deep heather which I was still having to wade through were hard work. The areas of short new growth worked well but were not conveniently placed and I was zig-zagging in a ridiculous way towards the stile. I probably only had to negotiate about 500 or 600 path-less meters, but they wore me out.

I finally found my son and bike. Normally, after mountain biking he is forced to change or travel home sitting on a towel. On this occasion I was wetter than he was!
Posted by Sue, Lynwoodcrafts at 17:22 2 comments:

..... I have been away for ages! Mainly due to time pressures/problems with Blogger/frustration with up-loading photos from Picassa (very cumbersome in my opinion!)

Anyway its now or never. I have been storing up lots of photos to share with you - some may now seem a little un-seasonal but I'm going to show you anyway!

I'm going to begin with some inspirations from the garden (both in culinary and needlework directions): 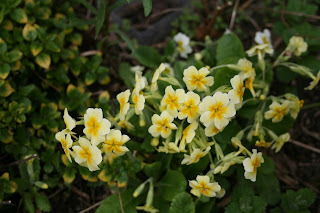 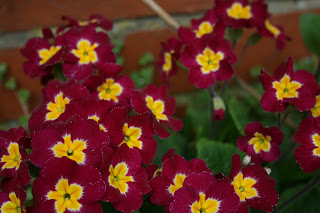 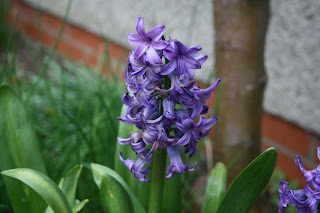 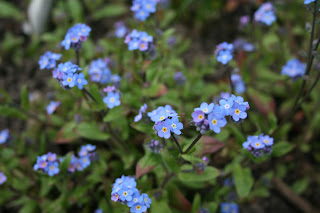 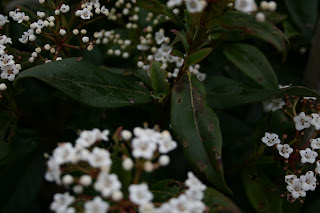 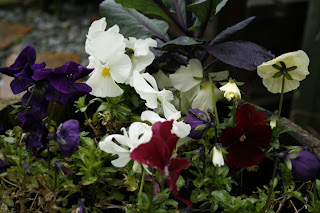 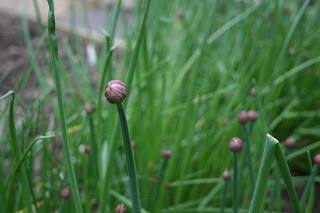 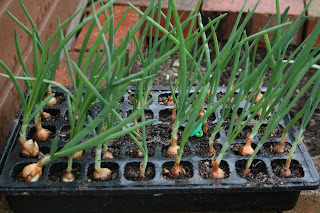 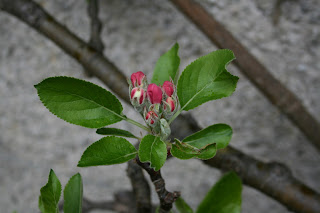 Hopefully, with a bit of self-discipline and a trawl through a couple of hard drives' coupled with a look at the calendar and a little musing over what we have been up to in the last couple of months' I will get up to date quite quickly!
Posted by Sue, Lynwoodcrafts at 11:08 1 comment: