In common with most families we recycle as much as possible. I have various containers about the house - on my desk, in the hall etc, with loose paper scraps for notes. In an attempt to find a convenient way of carrying paper notes with me - in a bag or pocket, I made myself a PaperSaver notebook. It worked well and I decided to make some more to list on Folksy.

This is the first. What do you think?
Posted by Sue, Lynwoodcrafts at 16:03 1 comment:

I have quite a few cheery red items at present

I thought that I would look for some others to show you. My choices have been taken from the shops of fellow craftspeople who have been kind enough to support Lynwoodcrafts on Facebook, Flickr and here on my blog.
Click on any item to see it on its Folksy shelf!

The overwhelming vision is one of colour. One has the impression of strolling through a paint box - the sort with 'pans' or cakes of solid paint. In reality a huge, industrial scar inflicted on the landscape - but one of considerable beauty!
Rust red from the iron,vivid green, from copper and lots of heathery hues - many in the rocks of the spoil heaps, but also from the heather attempting to cover the slopes. We have lead mines near us and, due to the toxicity of the lead, the spoil heaps are completely barren. It was noticeable that there was little beside heather and a few brambles here. None of the usual tough moorland grass, but the heather was doing quite well. Above this colour a pale blue, cloudless autumn sky. I'm sure the photos won't do it justice!
The site of a large copper mine, since the Bronze Age, and also iron and lead, I believe. Having seen the prehistoric copper mines on the Great Orme, I was expecting something similar. In the sense that there is a very large hole - more in keeping with a quarry than a mine, it does have similarities. The Llandudno site has underground workings radiating from the main 'hole' and so, I think, does the Parys mountain site. There are many signs warning of unmarked mine shafts - perhaps not a walking area for young children or dogs!

A helpful information sign told us that we were correct in our impression of 'paint'. Material from the workings had been pumped, with water, into large settling 'tanks', or pools, The sludge scooped from the bottom, when the pools were drained, was used for paint pigment. I felt slightly uneasy about the possible destination of the water which was drained away, and presumably a potential source of pollution.

On the way back to the car park - on the site of newer workings just over the road, a sight which was so familiar to me in childhood and now gone - pit-head winding gear. I grew up in, and have returned to, an area with its industrial roots in coal and steel - now gone! Also now gone the tanneries, breweries and paper mills that once followed the course of our local river. 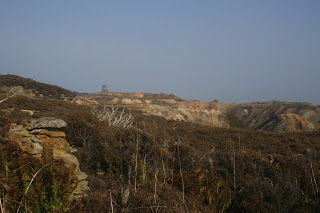 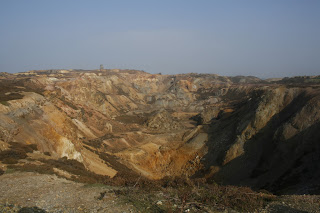 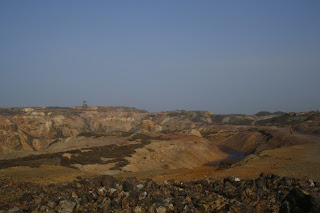 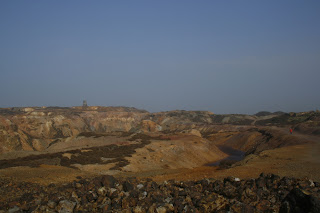 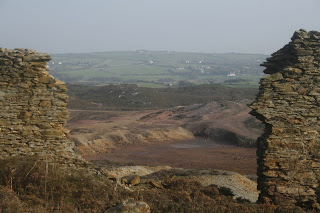 ---o0o---
This is my latest Folksy item, and something new for me. The design will look familiar to those of you who know my shop. However, this time it decorates a barrette.

A beautiful week-end and, with both kids busy doing Scouting things, with a bit of careful time management, we managed to indulge ourselves in some time along the North Wales coast.

Firstly, I have some apologies. It is ages since I have blogged, and then only Folksy Fridays, for the last few weeks. I have been offered a new blog award, which I am thrilled about - but I musn't accept until I have time to do so properly and pass it on correctly. I shall endeavour to do so before the end of the week. Sorry to seem so rude!

Why so busy? Both children have been extra busy over the last two weeks - 16 year old especially. He has been heavily involved in extra activities at school, and at home - Scouts-wise. He hasn't even managed to cycle for weeks! A lot of driving about has been required etc. Craft-wise I have been trying to list daily. Yesterday was entirely swallowed up by trying to get to grips with Facebook. No idea why I picked yesterday, but as it turned out, Folksy launched its Facebook Shop App., yesterday  so it was quite exciting (and for me - quite challenging!). I got there in the end - please pop over and leave a message Lynwoodcrafts.

So now to Ynys Mon. We dropped daughter and her Scouting friend at Bethesda for their expedition challenge and drove on to Anglesey via 'the new bridge'. Stopped at a lovely view point, overlooking the Meani Stratights for a cup of tea, then down to Menai Bridge. We couldn't find anywhere to park the van so continued to Beaumaris. Managed to find one car park - but we didn't fit in the spaces and it seemed 'a little windy'. Although set back from the sea, we were rocking violently and drenched in salt spray. We gave up and moved on to Benllech. Fortunately, we spotted a parking opportunity up on the main road and walked down to the 'beach'. Glad we didn't drive down, see below. 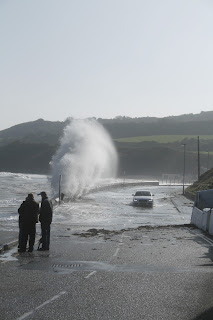 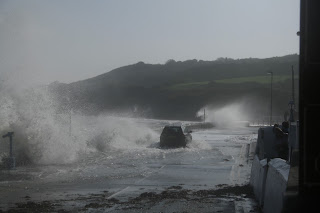 Apparently the result of strong wind coinciding with high tide - away from the sea front it really was a lovely day. The sun was strong and 13 year old managed to get sun burnt again, as we discovered the next day.
We moved on towards Amlwch and Paris Mountain - more tomorrow!
---o0o---
I had been concerned that I was not offering gift boxes or bags for my brooches. I think that these gift purses are a great solution. They could also be used for a gift card ( or even old-fashioned bank note). Carefully stitched, but with minimal embellishment, they are offered at low prices. I believe in FairTrade, so I have carefully timed my stitching. Produced as a small batch, I can just manage the minimum wage, whilst recovering my fabric costs - which I hope satisfies everyone's requirements. I hope you like them!

I love the feeling of space, open skies and so much fresh air ... a walk across heather covered moorland. The plant itself doesn't quite convey the same feeling, but we have some in our garden to remind us to dig our walking boots out. These walks were the inspiration for some of my brooches:

Many other Folksy Folk have been similarly inspired - here are a few of their creations. (Click on any item to visit it in its Folksy store.)