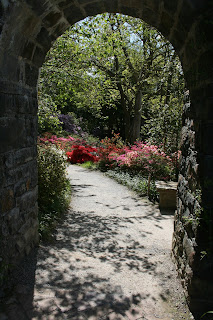 I recently read an article recounting an artist's art-free, 're-charge-the-batteries' period of a week or so of travelling, camping, photographing and generally re-stocking her 'creativity'. As she pointed out, it is not possible to partition our lives into work time/family time/leisure time as we might if we had 'regular' jobs. Certainly we try to be disciplined about setting time aside to complete items, do the necessary admin caused by on-line selling etc, but inside our heads we do not have separate departments in this way. Every aspect of our lives is intertwined with every other, 'intersections' often being the most fertile  areas - although also having the greatest potential for conflict.

When I started this blog my children were much younger, I didn't want to include too many direct references to them in my posts and I thought observations relating to our way of life would seem tedious to any readers I may have. Having thought carefully about my reactions to a variety of other folks' posts which I have recently read, I have decided that too few 'daily references' create an impersonal, near to anonymous, feeling. Don't worry! I'm not going to start cataloguing all the minute and tedious irritations which life brings - the fact that, yet again there were three 'orphaned socks' in the washing machine and yet again they were all my daughter's etc. My intention is more to focus on celebrating the good things in our family life with brief references which explain some of the influences in my work.

My flash drive is overly full with a series of photos from earlier in the year - May half-term to be precise. Time to show you some of them and then re-claim the space (all pics are archived elsewhere!). For years, due to a limited budget, we had family tenting holidays. They could be hard work, we cooked all our own meals for reasons of economy, and coped with some dreadful weather - fortunately without much damage to equipment. The good aspects included fresh air, living with minimal 'stuff' for a while, a real sense of freedom and, usually, sociable fellow campers with whom to share an occasional drink or coffee whilst our kids enjoyed the company of their kids.

We were gradually acquiring more and more 'camping stuff'. Loading and un-loading the trailer, airing everything out, and so on, were becoming tedious. An inheritance allowed us to something wildly out of character and, instead of adding the money to our meagre savings, we bought a basic 'pre-owned' motorhome. As far as material possessions go, this has been the biggest single influence on our lives (. So many easy, affordable week ends away have been possible. All holiday planning revolves around using the van - we can't justify keeping it on the road and paying for other accommodation, but that's fine - we enjoy it so much!

In May, our son was still at University, and our daughter was spending the three-day bank holiday weekend at a scout camp. We couldn't be far away, in case of emergencies, so we booked a campsite at  Corwen. On the Saturday we walked down to the Rhug Estate farm shop. Having our kitchen on wheels with us, we like to buy and cook local produce when we can. I believe we bought pork tenderloin, lamb leg steaks -( home-produced and organic), some redcurrant preserve, and some sort of bottled gooseberry sauce comes to mind - for with the pork. After lunch we had a long local walk, set up the 'travelling bird feeder'  - the kids Christmas present to me - the pole support being 're-purposed' from a set of tent porch poles! - and pan-fried the lamb with redcurrants - yum!

Having recently joined the National Trust, my husband decided that he would like to visit Bodnant Garden. He spent quite a bit of the Sunday complaining that he was being denied access to his camera - a perfectly valid complaint - but what did he expect with all this stitching inspiration available. I have shown you one or two pics in a previous post - here are some of the others: 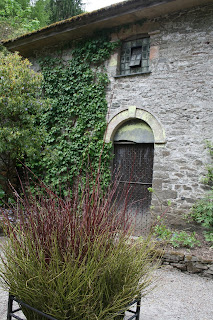 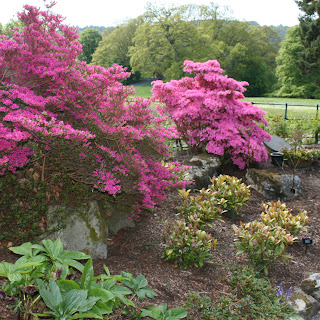 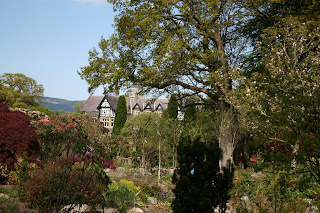 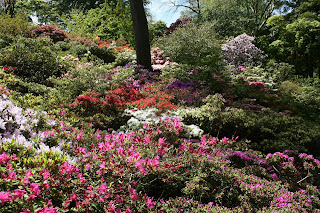 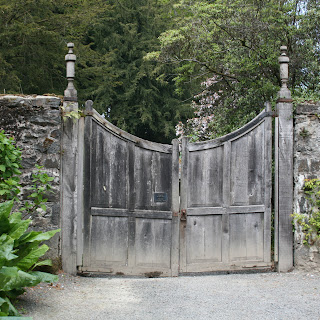 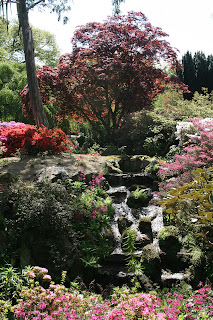 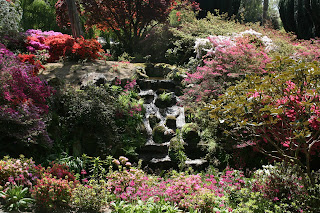 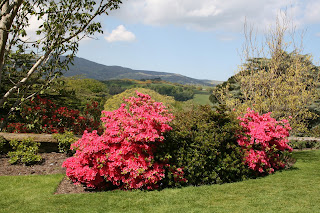 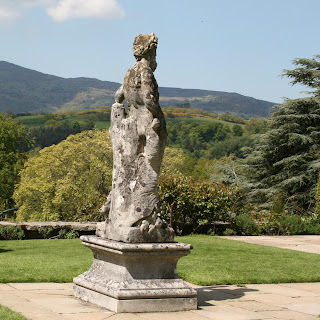 I am still trying to perfect a stone wall background for wisteria. I loved those old gates - so filed them away for the future. Not sure about the statue - but it sets the atmosphere. I have yet to attempt water - I think moving water will be tricky - water-lilly pools may be more easily possible.

This is just a representative selection of a productive 'day off'. The pork, cut into medallions, was pan-fried with leeks and that gooseberry sauce!

Posted by Sue, Lynwoodcrafts at 13:56 No comments: