... not, you understand, from a botanical point of view! A pocket guide to wild flower identification suggests I should focus on the numbers of petals and leaves, shape of the flower, number of flower heads on a single stem etc etc.

For my purposes, 'classification' of flowers is far simpler and is based on the main embroidery stitch which I use to represent the flower. This varies a little, depending on the materials which I am using. Threads and wools are broadly similar, but different effects are achieved with the use of ribbons.

Most of my recent floral embroideries have been in tapestry wool against a hand-knitted background. So far, they have fallen into two 'types' -

Daisy-like - composed of straight stitches, around a French knot centre. These could be daisies, chrysanthemums, some anemones, sunflowers etc

Round-petalled - represented by blanket stitch. So far I have stitched apple blossom, and cineraria. Others will include primroses, wild roses, buttercups... ( and also 'the top of bell-shapes' such as bind weed)

Doubtless other 'categories' will follow!
Posted by Sue, Lynwoodcrafts at 10:04 3 comments:

All Buttoned Up - Folksy Friday No 30

I searched for hand- made buttons, as part of my drive to source as many of my materials as possible from within Folksy. These are a few of my wonderful finds. Click on any item to see it on its Folksy shelf!

We have a vole!

Well at least one - I have only seen one at a time. I need one of the automatic cameras as used on Springwatch. As with most very small furry and feathery beings, it moves so quickly it can be hard to capture an image. I know where to watch for it now, but I can't spend all day waiting, and when it does appear I enjoy watching it so much that I don't want to spoil the experience by staring through the camera.

A few years ago, we had quite a little 'colony' of voles. We found a network of little runs and tunnels down one boundary of the garden. They were suspected, perhaps wrongly (we also have many mice), of harvesting our seed peas before they could grow. One in particular was very 'tame', or perhaps a little compromised in some way. In other respects it appeared healthy, but it would let us approach to within a few feet and once sat on my husband's foot for several seconds, with no apparent concern, or awareness. I was worried about our many owls and other predators. Beautiful as they are I was hoping they would find supper elsewhere. Unfortunately, that little chap succombed to a freak accident, having somehow found himself trapped under a black seed tray, which had blown onto the lawn, on a very hot day. We found him when tidying an hour or two later.

My son has been taking a keen interest in hanging new bird feeders and keeping them stocked. He also moved the makeshift bird table he had built as a young child, into the back garden so that I could watch it more easily. I think he was making amends for an unfortunate experience resulting from one can of beer too many at a friends New Year party and also trying to relieve some of the stress we were all feeling following my Mother's death.

Feeders have been hung from an arbour sheltering a garden bench. Not somewhere we would normally put them since we sit on the bench in the summer and would prefer not to have to clean it of bird droppings each time. However, it is close to the conservatory windows. Concerned that the robin seemed unable to perch happily on the feeder my son put a small tray of food and a tray of water on the bench. The first visitor I noticed was a cheeky little gymnast who climbed up the jasmine and trellis at the side of the bench, whizzed across to the tray, filled his cheeks hamster-style, then hurled himself back down the trellis to safety. I watched for a while then became concerned that the tray was too exposed so we removed it. However, morsels of dropped peanuts and small seeds spilling from the feeders are also treats and we have now seen our little furry friend gathering these on many occasions.

Following one of the heavy snow falls, he was particularly adventurous, and, for some reason, made several forays into the centre of the lawn. Highly visible against the snow, at a time when everything was  hungry, we rushed out to scatter some extra seed under the bench to try and persuade him to stay under cover. We didn't see him for about ten days, happily he reappeared at the weekend - much to my joy.

I'm really looking forward to sitting sewing in the garden, on warm spring days, with at least one eye on the corner of the bench and the jasmine. January is said to be the most depressing month of the year. I'm not sure that it is for me. Apart from my son's birthday, November always seems a bit cheerless. I am not naturally a 'content-in-winter' sort of a person. In November we have a lot of winter yet to come, whereas by late January most of it seems behind us. The second half of March has been really warm camping-weather for the last few years. Not long to wait now!!
Posted by Sue, Lynwoodcrafts at 10:51 1 comment:

The snow seemed to be melting, and although quite chilly, I thought today was warmer than of late. Having finished stitching a brooch and checked that tomorrows school uniform etc is ready, I suggested a walk. 13  year old was glued to the i-player and couldn't be parted from it, but 17 year old seemed glad of the fresh air and I hoped he would then study more effectively on his return. We walked further than I had intended, son took some photos ( four of which are below) and he did turn straight to his studies on return. Particle physics was proving a bit of a struggle yesterday - for both of us! - so I suggested a quick whizz through simple circuits and electrical theory to maximise the marks he might collect in this simpler unit. Unfortunately, he is now in a state about the difference between 'potential difference' and 'emf'. I can't see his problem and have exhausted all two explanations which I could muster - and then run out of patience. He doesn't get my explanations, knowing they are both measured in Volts he sees them as identical, thinks I'm making it all up and has now given up and returned to a computer game!!!! Time he learnt to listen in class without the partial filters of 'is this essential?' and 'can I be bothered?'. Teenagers!!!!!! It was a nice walk though! 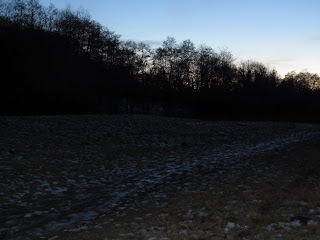 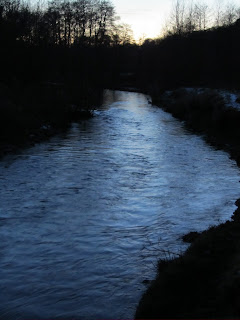 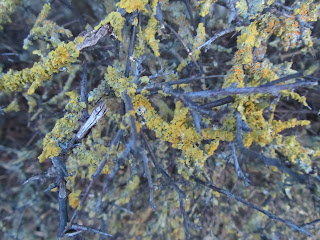 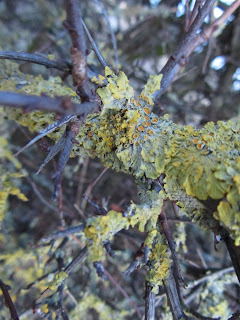 My son knows he had got into my good books for that second lichen photo which I shall add to my inspirations/reference folder. I just wish he would work at his studies!
Posted by Sue, Lynwoodcrafts at 19:27 No comments: