Having stocked up on bird seed, peanuts etc and a new feeder, my son has taken over the duties of topping up the feeders, putting out fresh water etc for the birds. In the first few snowy days, before our supplies were replenished, we most frequently saw the blackbirds, feasting on berries in the garden, with occasional visits from the robin. The seed and nuts have encouraged the appearance of the usual varieties of tits, including - as often happens in winter, my favourites the long-tailed tits.

My son has enjoyed watching them, although he did complain about the selectivity of the Great Tits which pecked from the seeder, and discarded on the ground, any seeds which were not their preference.

The behaviour of a Coal Tit amused me. He visited the feeder, flew to a hanging basket, which we had neglected to take down, stabbed his beak through the mossy lining and flew back to the feeder. At first, I though he was wiping his beak, although most tits do this by twitching their beaks from side to side across a twig. I sat in the conservatory for closer inspection and found him to be 'planting' seeds for us. Whether 'squirrel-like' for another day, or because he preferred others I had no idea - although it seemed too much energy to waste merely to dispose of unwanted seeds.

My son was complaining about the waste of  dropped seeds but I pointed out that birds which do not naturally perch on, or cling to a feeder, would gobble them up! Our son bought a compact camera on Boxing Day - really intended for his Scouting trip to Sweden, but also intended to capture action shots of himself and mountain-biking mates. He was experimenting with the zoom and speed - being concerned that the focus might not be quick enough for speeding bikes. He popped out into the garden to test it out on flitting birds. The shots below were his first attempts. Clearly, we needn't have been concerned about any seeds being wasted!!! 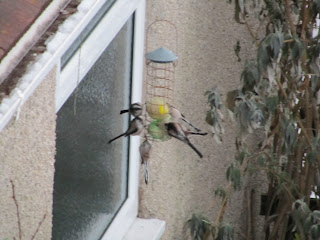 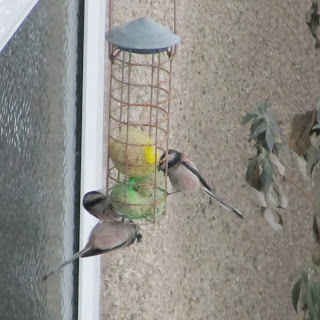 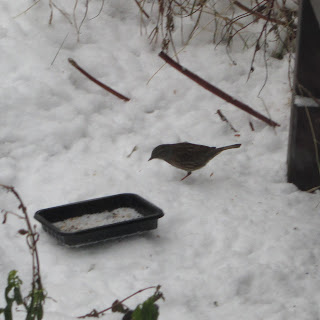 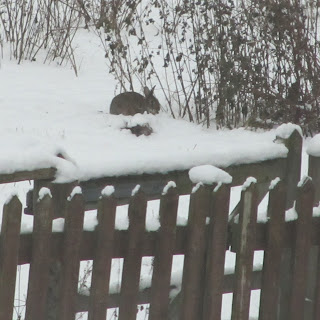 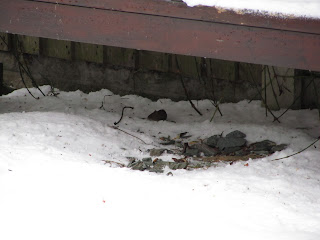 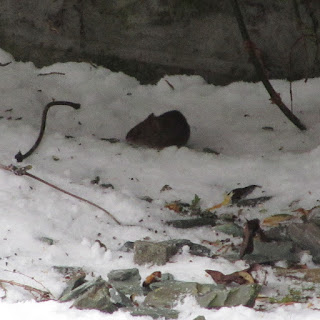 .. a term I favour to describe Lynwoodcrafts. I am hoping that, one day, it will be elevated to the dizzy heights of 'small business' but, for the moment, this will do nicely.

I haven't any pretty photos to show you today. This short blog is more a reflection on the Christmas trading period (so far - not quite over yet!). I have been amazed and flattered by the number of sales Lynwoodcrafts' Folksy shop has had over the last few weeks. People who have 'favourited' items really have been popping back to buy them. In one case, a scarf sold, a few hours later someone enquired if I could make another, then a few days later  someone else who had marked it asked if there was any chance of yet another. Sadly the design depended on using a particular yarn and I only had enough to accept one of the orders!

I still have much to do and much more to learn, but Lynwoodcrafts is now generating a small profit.  During the coming year I will be working harder at on-line sales and investigating opportunities for 'real world' sales - locally at first. At this time of year we often find ourselves chatting to new people over mince pies or a glass or two of wine. After the weather, an enquiry about the other person's occupation seems to be the most frequent topic of conversation between previously complete strangers. During the last year I have been a little vague - saying that I have been exploring the possibility of an on-line craft business. This year I shall be proud to say, when asked, that

' I have a micro business specialising in hand- embroidered accessories!'

Thank you to all my customers and supporters who have made this possible!

A note about my daughter- Folksy Friday No 29

My daughter is quite musical. She played the recorder at 4 years old - in self-defense from the shrill sound I found her a battered second - hand flute (she was 5 by this time) . We now live with a flute, alto saxophone, drum kit, acoustic guitar, dad's electric guitar (occasionally), folk whistle, harmonica, djembe drum .... She is now 13 and still cross that I wouldn't buy her the shiny blue violin that she really wanted when she was 5. We should, I suppose be grateful not to have to transport a cello or double bass, or even worse - a harp. I suspect more musical experiences will be added during her lifetime - I think we are about at our limit! We were really pleased when she attained a merit in her recent Grade 6 Flute exam.

This selection of items is a tribute to L-------. Unfortunately Folksy was 'flute-less'.

Click on any item to see it on its Folksy shelf. 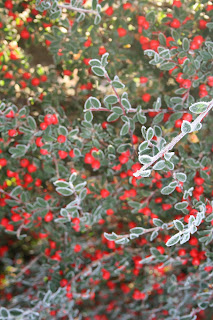 I haven't decided how to use these yet - I've got a couple of patchwork bags to finish for a customer to look at. Maybe I'll have time to play around with them next week. 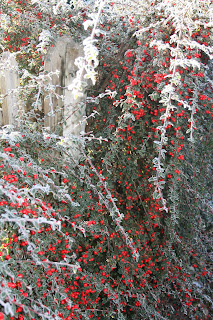 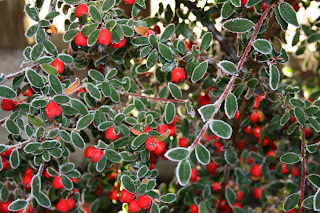 Posted by Sue, Lynwoodcrafts at 08:26 No comments:

Everything seems to be taking a little longer than usual due to the weather. We are fortunate not to have cancelled anything yet, but we are having to fit in lots of extra little jobs. I've set the kitchen timer to remind me to change the water for the birds. I forgot yesterday and a very sorrowful robin was trying to peck at the drips which were landing from our de-frosting van.

Whilst waiting for the cars to defrost on Monday OH took some of these photos. I thought there might be some urgency before thawing robbed us of the photos. Needn't have worried - it stayed like that all day and I was able to take some more: 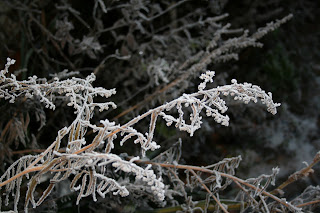 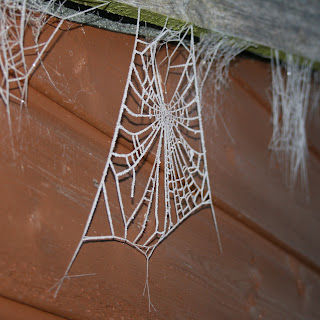 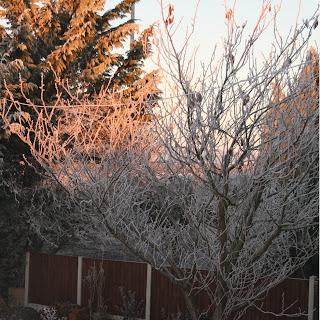 It seems that every view from our house windows is crossed by incoming services. However, the views are pretty, if you ignore the power lines etc. 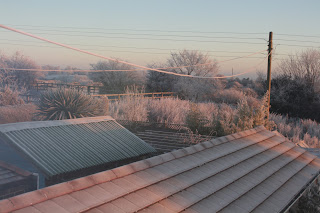 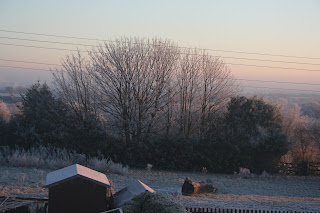 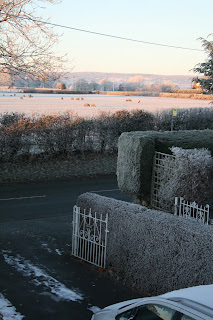 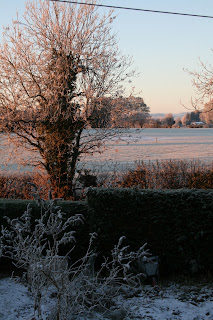 Just in case we should ever wish to sell our house - I should point out these photos were taken from first floor windows. We do actually have some lovely views and the power lines are not so prominent from ground level! 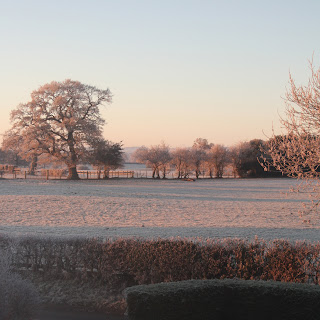 ---o0o---
I have just listed this Icy Lake Brooch (loosley based on a frozen Derwent Water a few years ago):

Whilst walking, and taking some photos, along the North Wales coast last summer,  I came across some tendrils of bindweed making their way along the edge of the coastal path. At the time, I thought they had escaped from the captivity of nearby gardens. Having read a little today, I have discovered that they naturally inhabit the edges of sand dunes, along the margins where marram grass is beginning to root. The bindweed has a trailing habit and survives happily with few rooted points. I have learnt many such snippets of information since starting my collection of wildflower brooches. I hope you like this latest one:

I have been wanting to embroider a design based on pansies for a while. Having done a little research I have discovered that the little wild mountain pansies are found in areas of upland grass,  in mountainous regions. They survive particularly well in areas where they are not cropped too heavily by sheep.

This is my representation of the mountain pansy:

I have produced several small pieces of felt today. They will form the backgrounds for some of my embroidered brooches and other pieces of jewellery.  They are quite flimsy, which is fine since they are always 'stabilised' by stitching to a base fabric before embroidery. The idea is to provide a unique, handcrafted background.

I thought I would show you these two pieces. Both produced using wonderful fibres from My Heart Exposed Yarns. Both use similar basic colours. The first piece has a 'double skyline'. Small backgrounds can be cut taking advantage of both. If larger pieces take one skyline and all the 'foreground' I shall have 'spare sky' for applique designs - nothing is ever wasted - far too precious! This first piece was quite successful and will probably be used for landscape designs. I have unintentionally allowed the brown fibres in the top layer to 'clump' together a little too much in the felting process, but the backgrounds can be cut to take advantage of these. 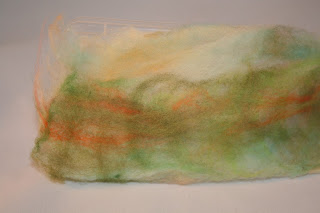 This second piece almost sent me skipping round the kitchen with excitement (well fortunately no one else was in and yes I am a big kid - the whole point of hand crafting is to experience, and for me, to share, this sort of 'buzz'). I had wanted a depth of coloured layers, with some fibres peeping through the top layer. When used in very small pieces as backgrounds this gives the appearance of meadow, hay field etc for my embroideries. I have managed one or two pieces like this before. The camera hasn't quite picked it up but the point is that a very fine scattering of short, quite coarse fibres, is dispersed across the final layer of fibres. These short fibres are in a rich blend of Helen's beautiful colours and they have had more affinity for the background than for each other so that they have not 'clumped together' like the browns in the first piece, but have felted to the background layers beautifully. 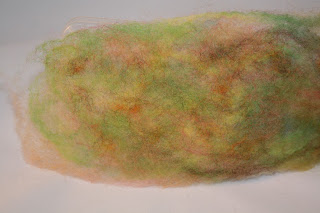 The flash coupled with the fact that the felt was supported by a piece of perspex in the light tent has caused the colours to appear  quite washed out here. In reality, against a dark background, they are beautifully rich. I now need to try to identify the type of this fibre so that I can talk to Helen about some more!
Posted by Sue, Lynwoodcrafts at 17:52 2 comments:

Those of you who have read my first blog posts will know that snowdrops are very special to me (Snowdrop Lady - March 2010). Variations of my snowdrop embroideries are also very popular at the moment. This is my latest:

Posted by Sue, Lynwoodcrafts at 10:56 No comments: