A fragrant herb suitable for culinary and many other household uses.

My first encounters with lavender were whilst playing hide and seek in my Grandmother's garden. She lived in an old cottage built to one side of its plot. It was surrounded on three sides by its garden, but there was no access around the fourth side. There were many places to hide. It was an old cottage and had a building, then a coal store/garden shed/outside loo, which had once been a stable - with a hay loft above. It was possible to run right around this and, timed correctly, this removed the need to hide. If playing with only one 'seeker' it was possible to merely circulate, out of phase with him or her. However, that ploy became a little monotonous. Alternatives were a large clump of bamboo - a little hazardous since the leaves were razor sharp, a hedge cut into a large archway, a small shrubbery, a short hedge enclosing a vedge plot, the front porch - entwined with a quince tree, and lavender bushes. The lavender was particularly useful since it was planted on a 'dead-end' path behind the cottage. It was a 'point of no return' - one either hid successfully or was captured. There was no possibility of worming on my tummy to other cover, or of making a run for it undetected. The lavender bushes were very large and  hosted a large and busy community of bees and hoverflies. They filled the senses. Soft and tickly to the touch, fragrant, noisy with the buzz of insects, beautiful to look at - and, as I discovered in later years, very tasty. It was almost a 'companion planting' principle. I 'planted' myself in the lavender and protected by the insects, which my sister feared, I remained hidden - or at least if some part of me should become visible she pretended not to notice in order not to need to get too close!

Some years ago a friend of ours bought us a gift of a fabric bag filled with 'Herbes de Provence' and attractively tied with a ribbon. We stored it carefully and it lasted for some time making a characteristic addition to many soups and stews. When it was eventually finished we tried many times to replace it, but always found our new supply lacking in something. We eventually realised that the lavender was missing from our alternatives.

I have many aromatherapy oils. The ones which I most frequently replenish are tea tree and lavender. Of these we find the lavender to have the more varied use. In checking my reference books before writing this I find that it may be infused as a tea (I'm off to raid our very small, juvenile bush as soon as I click 'Publish'). Its many uses center aound its calming and antiseptic properties. Strange it is that a plant which, when growing, attracts so many insects, and yet in dried form is an effective insect repellant. Successfully warding off, amongst other wee beasties, clothes moths - an animal to which I show very little mercy!

This is my latest lavender bag to be listed on Folksy:

Millie changed her frock and this one was added to my shop at WowThankYou: 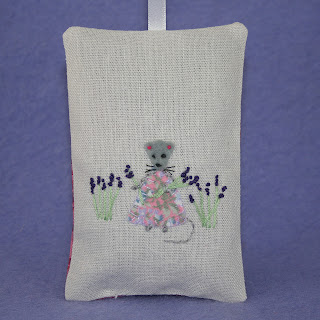 In my case, the ingredients include a keen interest in acquiring new craft skills - predominantly those relating to textile crafts ('Jack of all trades and master of...' comes to mind - but I get by). A firm belief that I am not an artist, have no artistic traits/skills/tendencies and yet I can 'cook up' a good idea from the ingredients to hand. An unshakable tendency to hoard fabric(new and 'recyclable')/yarns/beads/threads.... A good library of craft books and magazines, including a lovely set of vintage 30s,40s,50s needlework magazines and a bound set of 'Golden Hands'. I learn techniques, pick up hints/tips/tricks but absolutely and rigorously observe all copyrights. I am guided by a firm belief in Fair Trade principles. For some reason, a love of tiny things and miniaturisation has always been quite central to my interests. I think this may have been born of limited pocket money and shortage of materials, as a child, coupled with some favourite baby dolls which were only about 6 inches tall and for whom I fashioned many wardrobes!

Many of the other influences are even less tangible. I have always had an interest in wildlife and the countryside, in the heritage and traditions of craft skills, in growing our own fruit and veg, in the effects of colour and texture on my mood. (The ways in which certain combinations can instantly and unexpectedly unlock archived memory files - causing recollections to flood out constantly causes fascination).

Why it is that the ingredients for my soup give rise to certain broths or creamy creations and not others I have no idea. Many of the ingredients in my store cupboard are personal and unique and are only in my possession. The exact combination of ingredients in that pantry is entirely unique - much of it based upon life's experiences.

I shall try to give you an idea of the ingredients selected for today's concoction. The aforementioned fascination with things miniature, a stock of printed cotton fabrics, a (possibly) rather strange imagination, an undeniable love of 'cute' themes - which I have tried to hide (unsuccessfully). The importance of family life and precious recollections of the many milestones along the way. Lastly, I think, a family of little robins. Published in a women's weekly magazine, each chapter in their life story was only a couple of paragraphs, together with a single illustration. Every Sunday my father cooked breakfast and mum had a 'lie in'. Difficult to achieve with a young family, her solution was to let my sister and I scramble into bed with her and listen to the latest escapades of Rowly and Rowena robin. Brief in written detail, most of their family antics were hugely supplemented by our imaginations.

My imagination, coached by the author of 'the Robin Family', has now embarked on the textile illustrations of the lives of Millie Mouse and friends. Your imagination will need to supply all the details. Today's offering is 'Isobel's First Day at School':

..... a recurring theme!
I have revisited my poppy designs many times - using different materials and techniques. Equally, the cheerful daisy motifs which I embroider have appeared on many different items in a myriad of colours. The  next theme to be re-visited is ....... mice.
As a young child, an elderly friend of may parents, who called on us once or twice a year, once came with a lovely little gift from the church fete - two little mice! About three inches tall, beautifully dressed, with little felt heads and tiny leather hands and feet, they were treasured. My father used to come in for lunch ( we lived next door to his business). He used my building bricks (a fore-runner of 'Duplo') to build houses - the mice were dropped in before the last roof brick was put in place. I would then peer at them through the windows. Some years later I looked for them to no avail - they seemed to be lost!
I played about with scraps of felt and fabric and made a pattern for my own version. A felt head and a little cylindrical body, male and female mice (including a bride and groom) were carefully dressed and given little accessories - baskets of flowers etc. They sold well as a fund-raiser at the school fair. This success in spite of their 'arms'. Now called 'chenille strips' - in my day, 'pipe cleaners'. I was unable to find suitable grey ones and my poor little mice had rather strange anaemic-looking white arms. Some were fortunate to have sleeves - fiddly to sew but they looked much better!
A few years ago I had the task of clearing my mother's house. A joyous discovery was made! In the dresser  was a collection of novelty egg cups - Noddy and Big Ears (complete with hats), a panda, some strange looking chickens... I remembered all of these and finding them was quite a reward for plodding through a tedious task. Next to them on the shelf, some coloured felt items turned out to be egg cosies - several made by my sister as a child. One of the cosies seemed a little 'rounded'. Too large a 'bump' for a spider, but, unable to imagine what might lurk inside, I peered in cautiously to find...two lovely little mice. Missing for more than forty years - but perfectly safe.
Millie Mouse and her friends are the products of my fabric store, nimble fingers and an imagination coloured at an early age by two little mice! I hope you enjoy them.