Our house is never very quiet - outside school hours I mean. A small metallic blue thing, no bigger than a credit card, when attached to a 16 year old by headphone leads, is quite inoffensive. Attach it by a different lead to an amplifier and/or computer... (The best place for it is in one of my gadget cosies - see later).

Noisy though our 16 year old can be, his 13 year old sister is far worse! Her brother began clarinet lessons at the age of 8, and she felt left out - the nagging started. I bought her a descant recorder - I thought she'd soon get tired of it! SHE didn't! In desperation I bought a treble, lovely - more mellow sound, but - silly me (musical knowledge zero), the fingers of a five year old don't reach its length. Daughter was still nagging for something to play. Next I happened across a very elderly flute. What was I thinking of? I could barely work out how to put it together. Our local music shop advised that, after a service, it would certainly be suitable for a 5 year old. With a book the 5 year old mastered the basic fingering, without any help, and joined in with group lessons at school. We progressed to shared music lessons for them, the teacher kindly found us a much better flute on ebay - sorted? I wish! Our son did a few exams,realised it involved hard work and gave up. At the age of 10 his sister needed a better flute to prepare for grade 5!

Nagging didn't stop. At age 9 - 'I'd like a saxophone'. 'Instead of the flute?' - 'NO.' 'Well you'd better start saving up!' Two birthdays and the value of one Christmas present later - one alto-sax. My sister-in-law plays an African drum. Daughter tried it - saved up for one. At some point a 2/3 size guitar joined our collection and a harmonica found its way into a Christmas stocking.

At secondary school, I thought it would be good for her to study something, from scratch, with other students in her year, in order to share music with them. I can still here myself saying "...we wondered about percussion lessons". They have a very good and enthusiastic music teacher - that sort of enquiry is immediately acted on. I should have a better awareness by now, but I was vaguely thinking of the African drum. SCHOOL PERCUSSION LESSONS ARE GIVEN ON A DRUM KIT!!! Well I know that now! Daughter loves it. Nagging started again. Piggy bank (hers I should emphasise - she is good at saving) emptied, enquiries made, resistance worn down, dining table moved.

Our daughter was uncertain what to have from us for Christmas. Other family members were kindly re-filling the piggy bank - ready for Scout camp. I hated the thought of her not having something to open. Three days after leaving her appendix in the operating theatre, we were back in the music shop trying out guitars, she looked a bit uncomfortable but managed. One or two recent chart hits came from these trial instruments. Apparently the chords are available on-line and she had been using her small guitar! I'd no idea she could play it!

If I dare to complain about the 'noise' at home? I'm told that it 's my own fault - I should have let her have the shiny, blue violin she really wanted when she was five.

(And that would have given us a quieter life?)

( Afore-mentioned gadget cosies available in my Folksy shop. How about this one?) 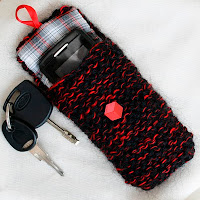 Posted by Sue, Lynwoodcrafts at 10:05