The trouble with a downhill stroll on the outward journey is that it turns into a little of an uphill slog on the way back - I'm not very fit at present and we had been walking for about three hours by the time we  decided it was time to cook tea.

Ludlow was a walled and gated city - strategically built on the top of a hill as the first photo in the last post shows. This house was, according to its plaque, a gatehouse: 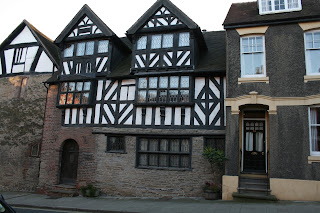 set into the town walls: 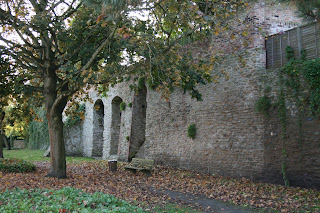 The river is beautiful - it would once have been a center of activity, with mills and tanneries. Some of the old mill buildings survive. The light was failing us at this point, but the following give you some idea: 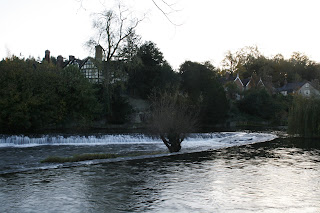 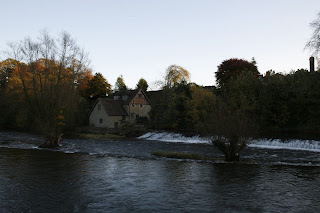 If I had to describe Ludlow to someone from my part of North Wales, I would say, in size and feel, it reminds me of a combination of Whitchurch, Oswestry and Ellesmere - local, small, Shropshire market towns which I love; combined with something of Chester (on a smaller scale) - particularly near the river. Setting aside Chester's prominent Roman remains, the black and white facades, the weir - almost beneath a main crossing point, and the resident ducks and swans all felt familiar. This particular duck was absolutely beautiful. I have no idea what he is. He was perfectly visible to the eye, but the failing light has caused him to blend into the river a little too much! I'll have a go at showing you anyway - please let me know if you can identify him: 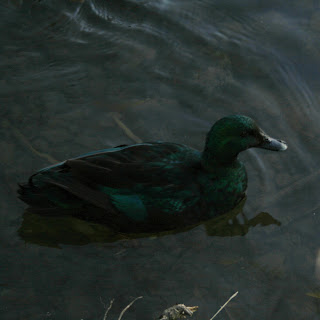 I have been stitching a series of felted and embroidered bookmarks - each one is unique in composition and the flowers grow organically out of the felting.

This one - a felted panel with ribbon tails, was listed, and sold, yesterday: 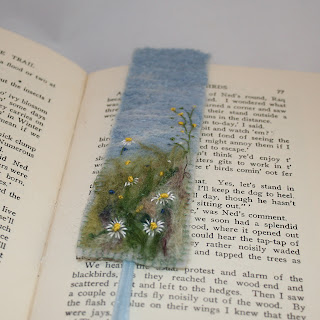 This has just been listed in Lynwoodcrafts' Folksy shop - a larger felted and embroidered panel: 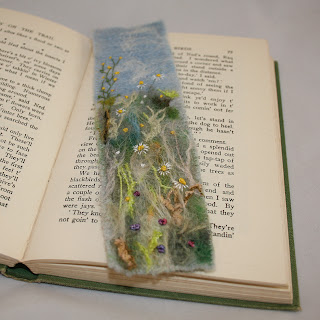 Posted by Sue, Lynwoodcrafts at 12:03