When did you start crafting? What are your earliest memories? Please leave a comment - I'd love to hear about them.

A number of items have come to light whilst on my current 'tidy up the house' project. I do tend to hang on to stuff - not a hoarder in the clinical sense now featured on TV - but I do find some things hard to part with. I have recently developed a liking for disposing of excess clutter - neatly bagged for recycling - seeing the process more as one of 'gaining space' rather than of losing possessions. However, there are some things for which I must preserve a home and this is one of them - just look at the packaging!!! 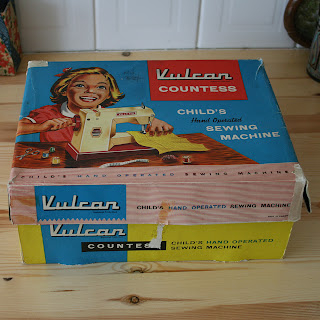 I'm not sure whether this was a Christmas or birthday gift and I don't have any photos or any other way of referencing the year in question. I do remember making a pair of shorts for my favourite teddy and would guess I was about 7 or 8 years old at the time. I'm not going to tell you exactly when that would have been but probably around the late '60s. I wish I could show you something I made on it. It chain stitches, the tension is temperamental and the stitching easily pulls un-done. It was actually quite frustrating to use and its a wonder I progressed to the adult version at all.

As an indication of scale - here it is posed next to my embellisher machine: 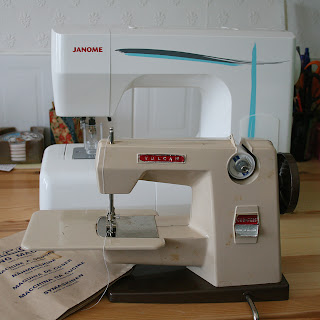 Although carefully wrapped in tissue paper, and in a bedroom cupboard rather than the attic, I was sad to see some rust marks on it. Both my two played with it a little - but fearing it might not be strong enough, I bought them both modern, battery-powered alternatives - neither of which proved as robust as my original!! Incidentally both of my two - my 19 year old son, and his sister, can use a sewing machine if they need to - although they have not taken to it as I did.

How were you introduced to your craft?

Posted by Sue, Lynwoodcrafts at 17:40