... horse-drawn canal boats, steam trains, white-water canoeing, climbing, walking and an active craft cooperative! What more could anyone want for a camping week-end of activities. (I hasten to add that the canoeing is the province of a nephew and my daughter is the climber in our family).

We camped a stroll-along-the-canal away from the town centre. Our two children were at a Scout camp for the week-end. Llangollen is close to home, and I grew up viewing it as an afternoon's somewhat boring outing. As a child, even the spectacular scenery of Llangollen did not interest me and my parents were not at all interested in outdoor pursuits, which we were in no way encouraged to sample. The town has now totally changed in my esteem. Although only a short drive from where we now live, life is so busy that we seldom get the chance to visit, and a leisurely week-end was just the thing. The weather was beautiful, there were ducklings a-plenty, the steam trains and canal boats were very busy and the atmosphere was great. The town is always busy and this week-end people were beginning to arrive for the International Eisteddfod which starts today.

Unfortunately OH hogged 'the' camera. OK strictly speaking the SLR is 'his' camera - which I borrow. I should have grabbed my compact - but, although good, I have got used to his better one now! Consequently, I can't show you the horse-drawn canal boats, or a direct view of the steam trains ( although you might catch a glimpse of the corner of the station). OH doesn't like the idea of 'tourist snaps' and wasn't persuaded by my mutterings of blog pics. Anyway - here are some general views of the town: 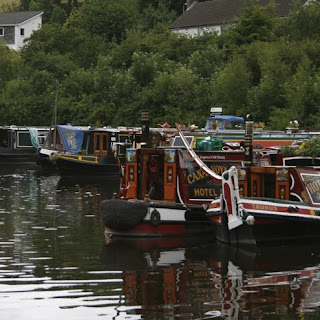 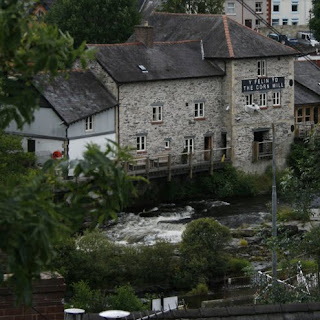 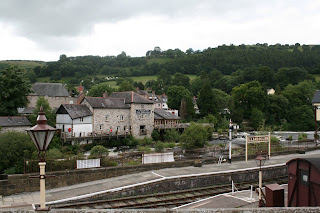 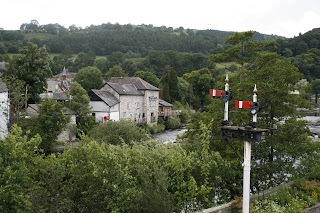 The Llangollen Canal is drawn from the River Dee, just above Llangollen. The Horseshoe Falls - a weir created to build a head of water for the purpose - 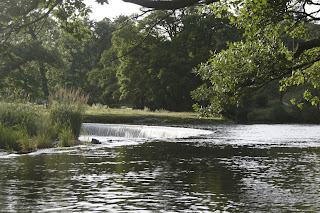 There were many families of ducks on the canal and on the river. Many of them were very small. Their mothers, accustomed to tourists, were surprisingly trusting of people with bird seed. I was pecked by one, another repeatedly tugged at my trousers when I wasn't renewing the scattering quickly enough. This small family, with half-grown ducklings, were by the falls. Nervous of OH ( no bird seed) they were very settled around my feet. 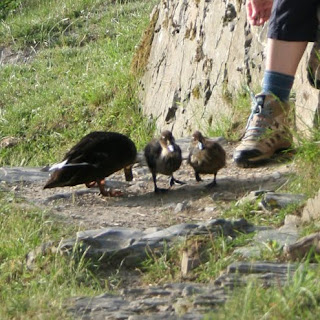 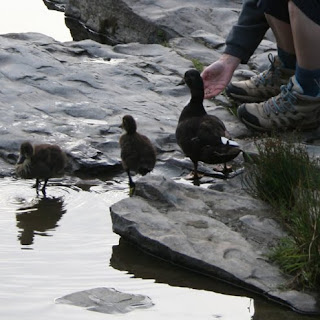 Having given them 'enough' seed we walked a little further upstream. As we returned, they were still there, and I couldn't resist having another chat with them - hence the second, darker, photo. The mother was wary of OH, a passing child, dog etc, but fine with me - until she shot out onto the water in panic. The ducklings followed her, then stopped a little way behind, huddled together on a stone. She was staring intently, quacking loudly, and obviously concerned. It was then that we, out-of-tune-with-the-environment humans, saw something quite large and black swimming across the weir and into some reeds. I'm not certain whether it was a mink or an otter - I'm off to Google some pics and try to identify it from my hazy recollection - now where was OH with camera?
Posted by Sue, Lynwoodcrafts at 10:24