At exam time I tend to find myself having late evening walks with my son. It helps him (or so I think) to keep a balance with some fresh air and exercise in his life and helps us both ( well I know it helps me) to sleep. Our nearest point of entry to our local National Trust estate is only about half a mile away.

Closed to vehicles after a certain time in the evening, the estate is readily accessible to walkers and cyclists. Over the last week we had grown a little tired of our usual routes, even though on one occasion we had undertaken a prickly detour in order to collect dry holly leaves as tinder for my son's Scout Group who were due to have a backwoods cooking session ( this was last night and our entire house smells of wood smoke - even though his uniform is in the wash. Even the porch smells of smoke - purely attributable to the presence of his boots!).

I suggested that, for variety, we should visit a small wood on the far side of the estate. My son decided to cycle down, I drove to a car park nearer to the wood. Many years ago, before our now 18 year old son was born, my husband and I were members of the local National Trust volunteers group, working to help maintain the estate, with occasional tasks in the garden. We did not get involved with the somewhat tidier and less muddy folks in the house itself. One of our tasks had been to install and maintain a network of board-walks in a wooded wetland which had an SSSI designation (Site of Special Scientific Interest). A small wooded area with steep banks, planted as is much of the estate, with now mature beech trees. It was to this wood that we were headed and I was disappointed to find that although access to the main drive is now improved, and accessible for wheelchairs and pushchairs, the boardwalks have fallen into disrepair and the wetland is largely inaccessible. A common problem across the estate is the maturity of the beech trees. Having very dense timber, and being very shallow-rooted, they become a problem after 100 years or so and tend to cause much devastation to other nearby trees as they come crashing down. There were some examples of this in the wood and access was even more difficult as a result. Pathways, which, when maintained were covered in bark chippings, on which one could walk silently, are now buried under very crackly beech leaves and old beach nut cases. Coupled with the fact that we were pushing my son's bike and chatting quite loudly we were far from quiet.

Before my son was born we had spent a few evenings watching badgers in this woodland. The sets being sited on the steeply sloping banks above the wetland and beneath pasture land. The badgers usual route was out of their sets and up the bank - sitting quietly opposite to the sets we had been delighted on one occasion to have cubs within a couple of metres of our feet! We would arrive early enough to be installed before they came out - hoping to be down-wind - since there was only one position available to us and having taken care not to use perfumed toiletries of any sort. We always felt these preparations to be necessary.

There are many badger sets on the estate and my son was not too impressed at having to be shown yet another. Having clanked and crunched our way to the bottom of the bank I was just indicating the very large set, a little indistinct in the twilight, when a rustling and sliding took us by surprise and a small badger cub skidded down the bank and into the set. Probably about five or six metres from us! I was just bemoaning the fact that we had been making so much noise and explaining that we were unlikely to see anything more that evening, when a larger commotion ensued and a further flurry of black, white and grey descended in the same undignified way to the set. I was taken by surprise and the light was fading. There were certainly a further few cubs ( my son thought three) and one adult. They really are large animals close to! We were thrilled! We also found a bank populated by holes which we suspect belong to water voles and watched numerous bats (I wished I could identify them - there were at least three species) hunting above the water.

Worried that we were irresponsibly late during a prime study week - we made our way back to the car (the bike to hitch a lift home). Our progress was further delayed as my son rescued three toads and helped them across the lane. Concerned that we may have misunderstood their intentions and forced them to cross against their wishes, my son insisted on watching for a few moments to make sure they didn't reappear from the verge, traveling in the opposite direction.

It was not an early night for us - but a lovely shared experience. It seems likely that the set has been occupied for the entire intervening 19 or so years. I'm not sure how long an individual badger lives. I was wondering how many badger generations had passed in between and what the relationship of our family was to the cubs I had seen 19 years ago. It seemed a strange connection that I had brought my 'cub' back to see their descendants! 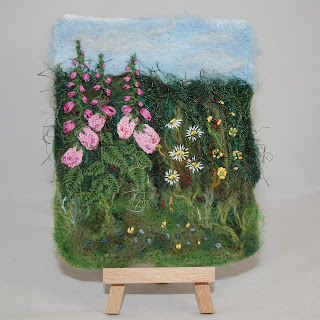 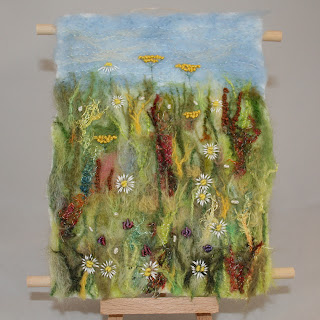 Posted by Sue, Lynwoodcrafts at 10:46