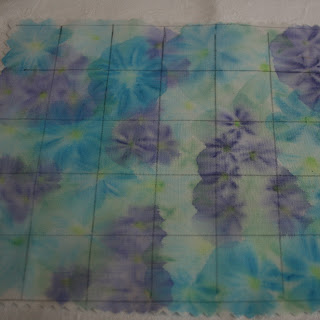 I have marked it into an inch square grid. Next I machine stitch each side of the grid marks to try to reduce fraying: 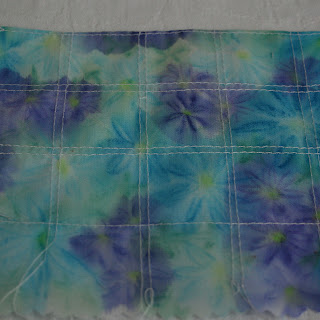 Then add a layer of organza and machine in place down each side of the grid: 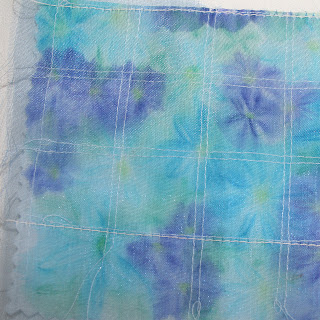 If the design looks a little too 'watered down' after the painting stage I have found that I can pick out some details in ordinary colouring pencils - bearing in mind that my inchies are destined for items that will not be washed. I have tried adding extra detail with the crayons and no water. However, I find that attempts to heat set this just seems to 'melt' off the top layer and this was still happening after three attempts with the iron. I should add that, as pointed out by Sam yesterday, the work should be wrapped in baking parchment to protect the iron!
---o0o---
To set off at a slight tangent - I wondered what effect I could achieve by painting a small design in more detail prior to embroidery. I outlined these poppies in Derwent Colouring pencils and filled them in with the same. I then used the Caran D'ache crayons to 'paint' the background - hoping for not too much bleeding of colour. Either the pencilled areas acted as an efficient resist, or the colour of the pencilled areas was so intense that leaching background colour doesn't show - but whichever, I was pleased with the result:

Posted by Sue, Lynwoodcrafts at 13:40