We arrived at the campsite on Friday evening for an early start on Saturday. The weather forecast was not good, but sounded better Saturday than Sunday.

Saturday was dull with frequent showers, and cloud - enveloping the mountain. We decided to try it anyway and packed three rucksacks. We were well equipped ( except that I had forgotten to pack hats and left my gloves at the campsite - a sad mistake! Yes - I do know that this is August).

I used to walk very regularly, and enjoy hill walking - if rewarded with fine views. I have never been very keen on mountains as such, and knowing that I am not really fit enough, thought that I might turn back half way and leave my son to carry on with his dad. I should have looked more closely at the map. I had a rough idea of directions in mind, and linear distance, but had paid little attention to the contours! From Dol Einion the initial ascent is very steep. Disparagingly referred to by my 16 year old as a 'motorway for walkers' the path is well maintained and stepped (very steeply). I prefer a slope to steps since they never seem to match my stride and force a peculiar stop and start pace, but I understand the problems of erosion and the need to maintain such a well-trodden path. I pitied the poor souls who had constructed the path way. 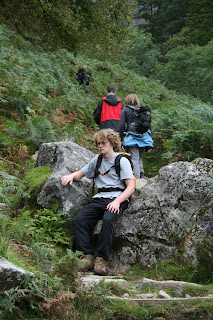 After this climb through a wooded valley, the path reaches open hillside and the the gradient is much more gradual. We gently progressed to the head of the valley. Initially, Cwm Cau, a very typical glacial lake, is hidden by its nearest 'rim' (looking almost like a man-made dam). Very impressive when it can be seen, backed by the final ridge up to Cadair Idris itself. 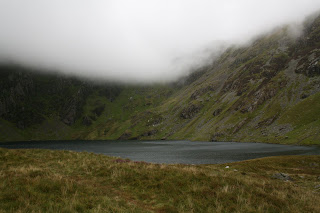 (Please forgive any typing errors - I fear I have too many plates spinning again. I am trying to cook a meal between loading photos and I need to pop down the garden to retrieve washing).
We had lunch beside the lake. Not as idyllic as it sounds. There was a strong wind and heavy rain, and that cloud came ever lower. We found a mossy patch in a slight dip - but it didn't provide much shelter. Husband abandoned us for what he thought was a more sheltered spot. We sat on large survival bag, put on waterproof trousers, added extra layer of fleece under caghules, and wrapped our backs in the excess of survival bag. IT WAS VERY COLD!!!.
The next part of the path follows slate steps up onto a ridge to the left of the cwm. I had thought I would turn back at this point, but finding the weather so bad and the path down steeper than I'd thought, it seemed wiser to stay together. So upwards I had to go. 16 year olds have their uses and he carried my extra water bottle which helped. 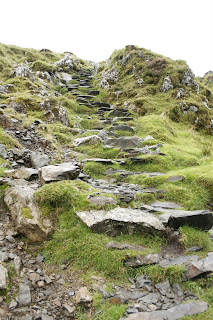 By the time we got to the top of this section we were in cloud with intermittent views. Not too disorienting, since we had a good sense of the position of the lake - just as well bearing in mind the sheer drop of a few hundred metres to its surface! 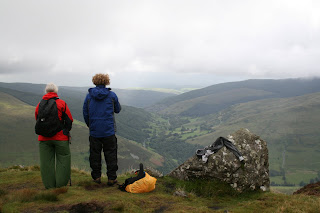 Over 'the other side of the ridge', Dol Einion to the left - we are looking roughly towards Machynlleth. (No my legs are not that size - the wind was inflating my waterproofs through the 'pocket slits'. This next is behind us, back down to the cwm. 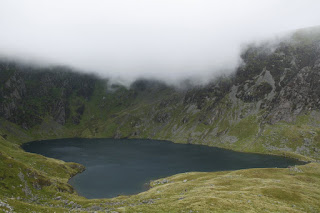 The path progresses along the ridge, onwards and upwards. There are patches which are more of a scramble than others. One section was almost level - very welcome! The following are of the valleys, occasionally visible through the cloud, roughly between Machynlleth and the coast ( only visible once and couldn't get camera out quickly enough) towards Tywyn. 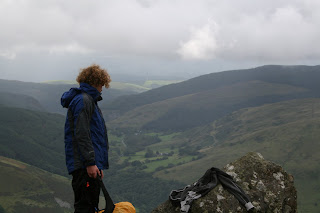 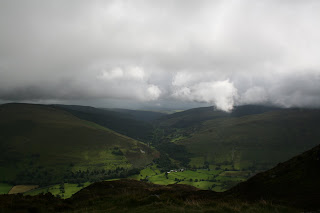 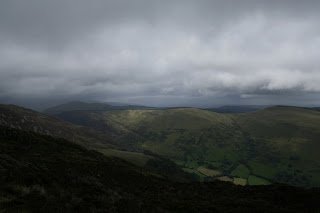 The cloud was lower, the wind was stronger - it actually blew me over ( OK I was tired but that's just the point!) and the final stretch is a descent of about 50m followed by a climb of about 150m, along a ridge with the walls of Cwm Cau on one side. Now the ridge is quite wide but the cloud was quite thick and the wind was unpredictable. My walking poles were brilliant but I had forgotten my gloves and couldn't retract my hands into my sleeves due to my poles! My hands were swollen, uncomfortable and clumsy. Other people were still pressing on. Including someone in trainers, jeans and a fashion jacket!! We had had enough. We ate a snack with our backs pressed against a boulder to shelter and then set off back. We had some lovely views on the way down, but the steps which I had found irritating on the way up, became a source of some pain on the way down. Many were quite steep. My walking poles helped but I need new shock absorbers in the regions of knees and ankles and even my  left hip. (Probably because I was trying to protect a wonky right ankle).
Sunday was even wetter and we felt justified in having walked on Saturday. 16 year  old had quite a soggy tent - strange how wet tents become my area (a bit like wet laundry!) 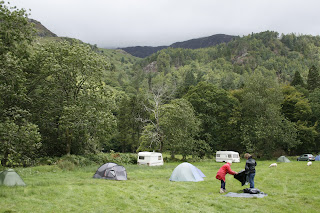 We had intended to spend Sunday near Dolgellau but gave up and came home (it takes about 90 mins) to find brilliant sunshine - at least I could dry the rucksacks, waterproofs and tent!
Must get some more practice before October trip to Cumbria.
Posted by Sue, Lynwoodcrafts at 21:51