I used to have a boss who was very good at passing everything across his desk and straight onto mine with very little filtering. There was little point in him having an 'in-tray' and all the 'pending' was in mine. In desperation I used to ask what priority he wanted the team to give to the latest task, he would invariably ask 'Why?' as if it could be of no possible consequence and when I pointed out that we were still some way from tidying up yesterday's emergencies, he would just reply 'Balls in the air, Sue, balls in the air'. I have always chosen to interpret this as a reference to a jugglers efforts to make sure that nothing hits the ground, rather than a crude, and somewhat confusing, anatomical comment. I prefer the analogy of spinning plates on poles - constantly increasing in number - or so it feels.

When I arrived back from holiday last week, I was managing to blog daily, list new items on Folksy (more or less daily), altered my website, did the backlog of holiday laundry and felt tired but positive about coping. Last week-end was OH's and my mother's birthdays and we were invited to spend a very pleasant afternoon with my mother's cousin. Two or three plates too many I fear. I have not blogged for days, activity on Folksy has been sporadic and I am brushing up metaphorical splinters of china plates as I type.

I think I have a few final photos to show you from Pembroke. We visited a fascinating beach near Newport, north of Fishguard. At first sight it was not attractive. Vehicles were encouraged to park on the beach, the sand was a murky blackish colour and the estuary was flat and lacked interest.

However, the beach had two redeeming qualities. The first was the exposed, and somewhat tilted, slate, which formed the cliffs. Easily broken into a very, very attractive form of shale, by the sea, it was responsible for the coarse, dark sand. I kept a few small pieces for inspiration - beautiful colour combinations!

The second aspect of the beach which I was thrilled to discover was very many wonderful rock pools - easily formed in the slate - they varied greatly in depth and size. Almost all had brilliant growths of sea weed. I have always loved rock pools and delight in searching for the creatures that live there, and these pools had many. I have never found much attraction in the seaweed. Usually finding only one or two sorts on a stretch of beach I was amazed to find more than a dozen here, and then stopped counting. I don't have sufficient knowledge to identify them but the range of shapes and colours were beautiful. OH kindly offered to photograph some. I was very disappointed with the results. Not interested in 'composition', I just wanted some clear images to add to my 'inspiration' file. I'll show you the results anyway: 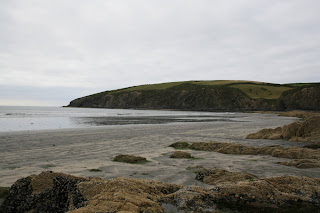 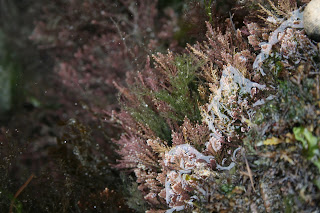 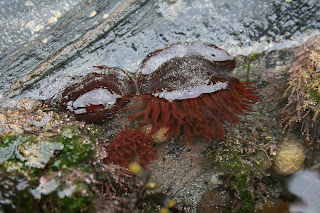 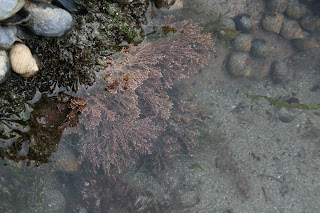