Am I a Designer?

An issue which various recent on-line discussions have prompted me to consider.

My initial reaction is 'No I am not!'
Is this correct? and if not a designer, what am I?

I have just been in search of my dictionary and thesaurus. Not finding it on the correct bureau shelf I checked a homework pile lurking in the corner of the sitting room - turned out to belong to my son - not likely to find a dictionary there then! Checked his sister's bedroom - not there but did borrow her pocket version. Not in my computer area! Back to the sitting room - definitely not on any of the book shelves. Daughter has her drum kit wedged into a corner behind the dining table and next to a display cabinet. The base of the cabinet provides a flat surface. There isn't enough space for a music stand but a cook-book holder on this cabinet is just about in the right position - except that ITS TOO LOW DOWN AND NEEDS RAISING by about the thickness of an Oxford Dictionary - FOUND IT!

Back to the original task. Having consulted four different dictionaries here and one on-line I find, as is often the case, that its not straight forward. Four of these sources go along with (paraphrasing) 'a designer is one who produces a design' ..... ' a design is a plan produced to show the details of an object before it is made'. One source used the term 'manufactured' in place of 'made'. However, another source suggested that 'to design' is to ' plan and make something artistically or skillfully'. The last definition is getting closer to what I do, but does not seem to be the most commonly accepted definition. The other four versions are more or less what I thought I understood by the term 'designer' before I started this research. Certainly, the inclusion of 'manufacture' in place of 'made' is moving away from what I consider that I do since to me, and all the dictionaries, 'manufacture' suggests production by machine and on a large scale.

So, if I am not happy with the label of 'designer' then what am I? I considered the term 'artisan' - apparently 'a skilled worker, particularly one who produces things by hand'. I think this is getting closer but I now seem to have lost any suggestion of an inclusion of artistic skills, although, apparently the ancient derivation of 'artisan'  is 'one who instructs in the arts' - so maybe this is correct. The term 'craftsman (woman)' is variously defined as 'artisan' (- so probably artisan is OK) or 'someone who practices a craft' or 'an artist skilled in an art or craft' or 'someone who displays a high degree of manual dexterity or artistic skill'.

In conclusion, since the term 'design' to me suggests the production of 'instructions' from which an item can be made, not necessarily by the person who drew up the plans and usually not as a 'One of a kind', but  rather one of a number, sometimes produced by manufacture - suggesting a larger scale of production - I don't think I would feel happy with this title, and its not how I think of myself. I would be happy to be called an artisan. The label which I would choose for myself, and which I would be most flattered to have applied to me is 'craftswoman'. 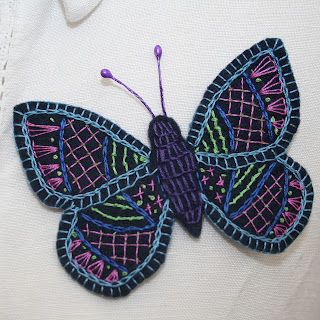 and a smaller butterfly listed on Folksy 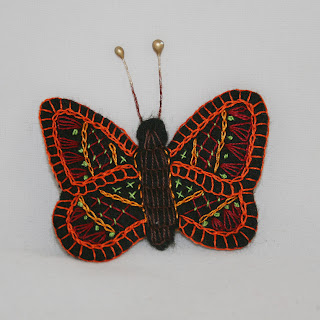 Posted by Sue, Lynwoodcrafts at 13:40