The house that Jack built

It seems that my window for 'getting things done' has closed, and, unfortunately, we didn't really make any progress this year. We are all spring and summer people. We camp, cycle and walk and do 'outdoors' stuff  for as much of the year as we can. When the diary is empty, the garden takes over. This is likely to be even more true this year since the front garden now needs 're-modelling'.

The winter, when it's cold, dark and gloomy is the only chance I have of in-door jobs getting attention. The problem is that we don't usually feel like making much effort in horrible weather. This winter has been worse than most. 'Outdoors' has continued for both children, with Scouts and Explorer Scouts continuing to camp and do other outdoor activities. The snow has been both an added distraction, obviously we had to do some sledging etc, and an inconvenience. In addition, my husband has been unexpectedly busier at work - due to some staffing changes. Consequently, progress (and even normal maintenance) in the house has been pretty much nil - we'll just have to make-do until next winter!

It really feels as though spring is here now. The sun is shining, the days are longer, consent forms are in hand for spring and summer camps and GCSE's are just round the corner.

My father worked very long hours for most of his life. However, he had about 12-15 years of active retirement, before ill-health over-took him. It was only in retirement that he had time for gardening. Mum had always had to do everything at their previous home and boundaries had to be re-negotiated, with a few minor disagreements, and at least one patch of 'no-man's land' persisting for many years. A vegetable plot the size of many an allotment was his pride and joy. Tucked away behind their garage was his greenhouse. Definitely his - although mum was allowed to start some bedding plants in a corner!

Dad died just before my 13 year old was born and Mum now lives in a nursing home. When we cleared their house we relocated Dad's greenhouse - to the bottom of our garden. It replaced a smaller one which we had and sits next to another small greenhouse which we decided to keep. These two will now be the focus of much attention. Pottering, planting out, watering etc. All chance of work in the house is over for the year! At present, the propagator is on and some onions are being started in trays of sand. Progress reports will be posted!

My husband is trying out an irrigation system which we saw at the Eden Project last year. Without some such arrangement, time away becomes limited to a few days or we have to ask my aunt to come and water for us. I'll let you know how it goes on.

Dad was known to everyone as Jack. My husband hung this somewhat 'wonky' sign in the greenhouse, in his memory. 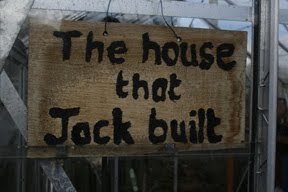 
With spring in the air I have just finished these two brooches - I hope you like them!