I have come to associate candles with a gentle light, pleasant perfume ( I don't like artificial scents but we do use tea-lights to diffuse essential oils) and generally relaxation. Of course, I recognise that, in the past, they were an essential, and often the only, form of artificial lighting. Thinking, perhaps, of beeswax, whilst knowing that many candles were produced from tallow - I had thought of the production process as being very similar to the repetitive dipping and cooling that we associate with the small scale production of hand made candles from paraffin wax.

The candle maker at Blists Hills took great delight in dispersing such pleasant thoughts. Now producing only paraffin wax candles, for Health and Safety reasons, he explained the Victorian process of candle making. Beeswax was for the rich folk only. The wax was far more valuable for other purposes - polish etc. Commonly, candles were produced from tallow. Not having thought about this much, I probably realised that tallow was obtained by the 'boiling up' or rendering of carcasses. I would have guessed that this was a by-product of the butchers or perhaps the tannery. I overlooked the fact that the Victorian's ate all but the 'squeak' of the pig and presumably other animals - probably not much left for candles there then!

The source of tallow was usually animal carcasses not fit for human consumption - and the Victorian's were less fussy than we are!! There may have been several reasons for this unsuitability for the food chain - animals having died from natural causes and remained undetected where they fell in the fields being amongst them. By the time they reached the candle makers, they were not a pleasant 'raw' ingredient. Had they then been processed immediately it would have been bad enough, but, apparently, they were stored on the first floor, above the production space on the ground floor, until needed. Brought down when required, to be boiled in large vats, the material was then, at least, reasonably sterilised. The vats were adjacent to the 'dipping tanks' and in full view of the customer's counter! The tallow, or fats, were scooped from the surface of the vats - the residue was scooped out and pressed, in a machine at the rear of the shop, into 'bricks' to be used as pig food. No wonder paraffin wax, with its attendant fire safety risks, is considered less of a health and safety hazard than the Victorian alternatives.!

When burned, the candles did not create a pleasant perfume!!!!

The above post has probably not been the most sensible introduction to a short promotional message. I hope I have carried some readers with me to this point! I love to use vintage materials in my work. I feel a privilege which comes of knowing that my items have an inherent 'uniqueness', which is nothing to do with the way in which I have interpreted them but comes with them from their source and can never be repeated. This quality may come merely from age - my latest items contain fabrics which I obtained as remnants almost 40 years ago! Perhaps the most prized materials are those which have been either created or modified by nature. Shells, broken and worn by the sea, and man-made glass and pottery -worked by the sea against pebbles into such special treasures. The backgrounds for these brooches have been 'felted' and distressed by using an embellisher machine, the focal designs have been created from sea glass, sea pottery and shells - the first of many to come - each one absolutely unique! 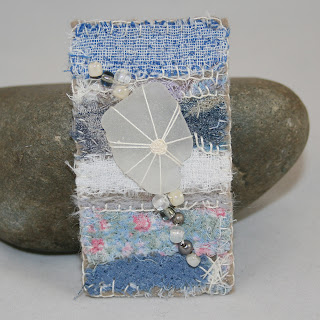 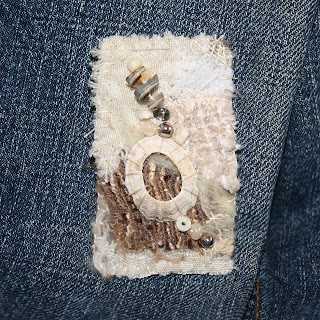 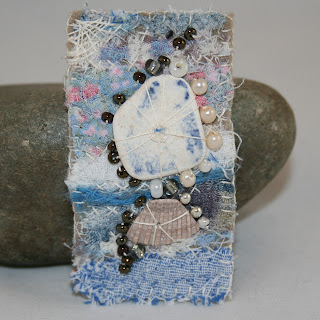 Posted by Sue, Lynwoodcrafts at 14:00