Altogether more than a 'plum blossom winter' usually brings. I was kept awake by the snow last night or at least by the thought of it. I heard a car skidding and looked out to see what was going on. Having seen the amount of snow that was falling I spent the next couple of hours willing it to stop and wondering how much damage would be done to the garden. The last time this happened in April we lost the fruit blossom. Anyway it had, thankfully turned to rain by this morning and most has been washed away here. Our view of the hills around Llangollen tells a different story!

I had planned to go to Chester to collect my daughter's saxophone from service, dropping my son off at the Scout campsite on the way and picking him up on the way back. He intended  to help with some maintenance work on the climbing tower. The snow and wind defeated his plans. I collected the sax anyway and, wanting to get as much use out of the petrol as possible wandered round a few shops. I'm not really keen on shopping centres, high streets in traditional market towns, with independent shops, are a different matter. However the wish to see benefit for fuel-spend served me well today. The cheap book shop, seen in every town centre, had a beautiful book of felted scarves and wraps for the sum of 99p. All the designs which I sell are my own, but I love to see other peoples work and learn new techniques. One item was made by felting mohair yarn in a way which I had not come across before. I can't wait to have a go. Unfortunately, I am supposed to take son to buy revision books later, then take his sister and three friends home, and I have something else to finish first. Maybe tomorrow. I'll show you the results if it works.

It seems a limestone carrier has gone aground at Llandulas in heavy storms. We know that stretch of coast very well. Industrial and with the A55 and Holyhead rail line nearby it is not the prettiest stretch. However, there is a long distance cycle track in both directions along the coast and I have often gathered drift wood pieces. Most worryingly, we have often watched seals and there are many sea birds to watch and kingfishers in a small river which enters the sea nearby. There is now a fear of pollution from the ship's fuel tanks - I hope there may be some way it can be averted! 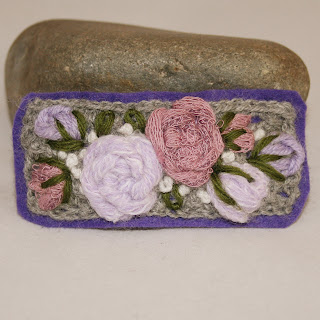 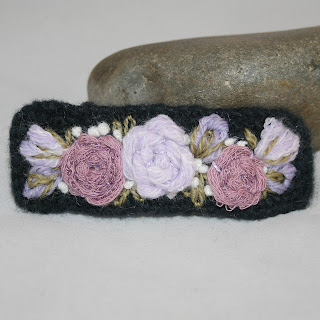 Posted by Sue, Lynwoodcrafts at 14:57